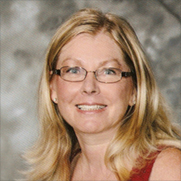 Upon moving to Brampton in 1985, Joanne worked for one year with the City of Brampton in their Preschool Department. In 1986, Joanne opened Building Blocks with Karen Sanger.

Since moving to Brampton, Joanne has continued to upgrade her education in the field of Early Childhood Education. In 2008, she joined the newly formed College of Early Childhood Educators. She lives in the Heart Lake area of Brampton with her husband, Paul. They have raised four very active children who are now all adults. Joanne actively participates in a women’s sorority and her book club, and enjoys gardening and keeping fit through Pilates and Yoga. Joanne loves meeting new children and their families, while working in a warm nurturing environment where she strives to do her best.

“I love to watch children develop and change for the better while attending Building Blocks. There is such a great satisfaction in helping children discover all their strengths, and at the same time observing their sense of wonder.”

When researching schools to place my son for preschool, Building Blocks came on top for many reasons. First, the teachers have many years of experience in Early Childhood Education and are very loving and nurturing – all being mothers themselves. Second, the program is structured, challenging, and creative in every class they offer. I was very happy with the preschool program that I placed my son in JK and in the future SK. I can’t tell you how impressed and proud I am that my son can read and spell all due to the one-on-one attention given in the program.

Thank you Building Blocks for making a difference in my son’s life.